As a strong young girl who has faced serious health challenges all her life, it’s no surprise Alia admires Princess Anna and Elsa, two of Disney’s strongest female characters. These Princesses have brought the humour, confidence, and optimism Alia needed to help her through tough times – and Alia’s Sunshine Dream brought it all together for her at a time when she and her family really needed the Frozen Princess’ support.

Alia was born with a chromosome condition causing developmental delays and seizures, but her condition became especially serious when Alia was suddenly hit with a life-threatening case of pneumonia. Then seven-year-old Alia was on life-support and had to be airlifted Kelowna, BC for emergency surgery in Victoria to clear her breathing. The experience gave her parents a new sense of urgency to put Alia’s dream of meeting her Princess friends into action. “Something like that makes you realize how precious life can really be,” said Alia’s mother Amy. “We said ‘She needs a smile more than anything.’” And that’s when Amy reached out to The Sunshine Foundation of Canada.

This is where YOU came in. Thanks to your generous gifts, Sunshine was there when Alia’s family reached out to make her dream come true. “We’d been hoping one day to take her to Disneyland because her favourite thing in the whole world is Frozen,” says Amy. “But I’d lost my job while Alia was recovering, and money is always so tight for special-needs families. We didn’t know how we’d manage.” 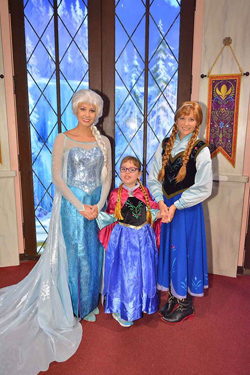 Alia’s Sunshine Dream began in November 2017 at a magical dream presentation at her local WINNERS store. Elsa and Anna were waiting there to surprise Alia with the news of her upcoming trip to their castle in Disneyland. Then only a few days later, Alia and her parents were in the air, headed to the most magical place on Earth.

Alia was fully immersed in the Frozen world of Disneyland. She visited Elsa and Anna in the snowy castle and met their snowman-sidekick, Olaf. Alia didn’t want the moment to ever end. “We couldn’t get her out of there,” mom explained, “She stayed in place for 20 minutes totally star struck.”  But even after leaving Elsa’s castle, Alia’s dream continued with front-row seats to the live Frozen stage performance. The show ended on a magical note, when Princess Elsa smiled and pointed to Alia on stage, noting their matching blue gowns. “We got to put that smile on her face that we were hoping for. It was just wonderful.”

Alia’s love for Frozen has only grown in the years since her Sunshine Dream. She’s had Frozen themed birthdays and tea-parties, and continues to love wearing her Anna and Elsa dresses. She’s thrilled for the release of the sequel Frozen II this November.  The magic of her Sunshine dream has continued to inspire her and her parents to live every moment together with the wonder and joy of her Frozen idols.