Whether you grew up listening to the hits of the Beach Boys, New Kids on the Block, Backstreet Boys or One Direction, swooning over the looks and the lyrics of a boy band is a common part of a teenage girls’ upbringing. So begins Jalee’s life-changing moment when she met her musical idol.

Just as Jalee was entering high school, challenges associated with her muscular dystrophy began to worsen. She was experiencing a lot of pain and muscle weakness and required surgery every year. This took a toll on her both physically, mentally, and socially, but One Direction was always there for her.

“[One Direction] helped me through all of my procedures. All of the doctors knew I was a huge fan so they played the music in the operating room. It was always a big dream of mine to meet one of the members.” Jalee explains.

In 2015, fans across the world were heartbroken by the news that One Direction had split. Jalee didn’t know what would come next. But it wasn’t too long after that One Direction singer Niall Horan announced that he wouldn’t give up on pursuing his dream – so Jalee didn’t either. She followed his musical journey online and shared his latest tunes over any set of speakers around.

Jalee’s Sunshine Dream came in the Fall of 2018, when she flew down from Sudbury, ON for a meet-and-greet with Niall Horan at his concert in Toronto. “It was the best week of my entire life,” Jalee describes. Niall spoke face-to-face with Jalee, took a photo with her, and then the handsome Irish heartthrob bent down on one knee (*swoon*) and signed her AFO braces. This was the very moment she felt a change in her life. 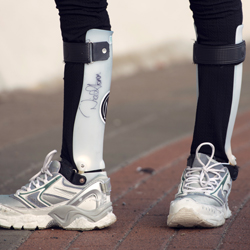 “Signing my leg brace was a huge thing for me. Before, I’d feel upset and insecure when people would point at my leg brace. But now I’m proud to show it off.”

To add to the magic of the night, Niall played two One Direction songs. Out of any of the songs he could have chosen, he played “Drag Me Down”, Jalee’s life motto from back in 2015. “Nothing can drag me down, not these operations, not my disability,” she describes, “for him to play that was meant to be.”

“This dream made a huge impact on my life. It’s something I can look back on. Any time I’m down I look at the photos and it brings a huge smile to my face. It brought me more confidence and so much joy.”

Back in Sudbury, Jalee continues to keep up with One Direction and Niall Horan fans around the world, some of whom she met at the concert. She continues to incorporate music into all aspects of her life as a motivation tool - especially as she studies and volunteers in physiotherapy.

“My goal once I graduate from college is to work with kids with disabilities and help people like me to take their first steps, reinforce their muscles. My biggest motto now is “dreams do come true”. 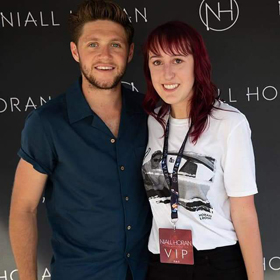